The Boldest of Designs

It’s usually considered an insult to say that an architect designs pretty packages, let alone that he borrows ideas from a dead genius.
But Jean Nouvel should be forgiven for resurrecting old ghosts. His Copenhagen Concert Hall, which opened here on Saturday evening, is a loving tribute to Hans Scharoun’s 1963 Berlin Philharmonie, whose cascading balconies made it one of the most beloved concert halls of the postwar era. And Mr. Nouvel has encased his homage in one of the most gorgeous buildings I have recently seen: a towering bright blue cube enveloped in seductive images. [...] 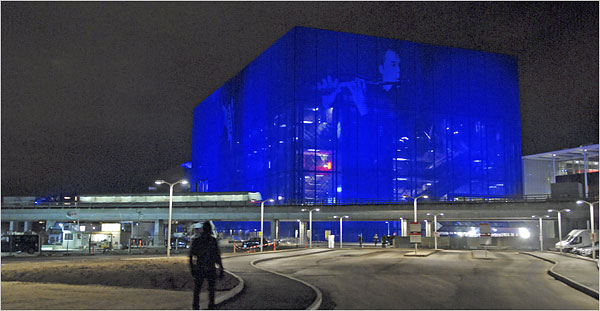 The Copenhagen Concert Hall has the ugliest setting of the three. In a new residential and commercial district on the outskirts of the old inner city, it is flanked by boring glass residential and office blocks. Elevated train tracks running to the old city swing right by the building; swaths of undeveloped land with tufts of grass and mounds of dirt extend to the south. [...]
It is in darkness that the building comes fully to life. A montage of video images is projected across the cube’s fabric surface at night, transforming it into an enormous light box. Drifting across the cube’s surfaces, the images range from concert performers and their instruments to fragments of form and color.
This is the intoxicating medium of late-capitalist culture. You can easily imagine boxes of detergent or adult chat-line numbers finding their way into the mix. [...]
As video images wash over the panels, the pictures break apart so that you perceive them only in fragments, like reflections in broken glass. More images stream across the walls. The effect is a mounting intensity that verges on the psychedelic. [...]

Was Tycho Brahe Murdered by a Contract Killer?

Over 400 years after the death of Danish astronomer Tycho Brahe, scientists in Prague are preparing to exhume his body. Was Europe's most renowned scholar poisoned with mercury? A Danish scholar claims to have decoded the murderer's diary. 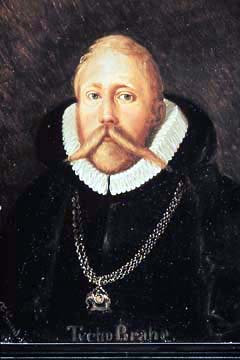 Walls of people formed to watch a funeral procession pass through the streets of Prague on Nov. 4, 1601. A herald carrying a billowing damask flag was followed by 12 imperial guards bearing a coffin covered with black satin. The man inside wore a full suit of armor.
Tycho Brahe, the brilliant observer of the stars in the Renaissance, was being carried to his grave. The scholar had systematically measured the sky, paving the way for science in the modern age. In 1573 he became the first person to describe a supernova, the explosion of a star.
His assistant, Johannes Kepler, praised him as a "phoenix" of astronomy. Brahe simply compared himself to the "Messiah."
He was also a bon vivant -- a member of the Danish aristocracy, and master of his own island. A biographer called him an "indestructible, blustering social being with an enormous appetite for food and wine."
So what killed this tycoon of the heavens? According to contemporary reports, while attending a banquet at the emperor's court in Prague, Brahe suddenly felt a strong urge to urinate, but was too polite to excuse himself. Finally, the reports conclude, his bladder became "twisted," blocked up or somehow "torn."
Kepler, who was also a tenant of Brahe's, witnessed the subsequent illness first-hand. Brahe was unable to urinate for 11 days, and he eventually died in a delirious state.

Thinking it was the sound of actual gunfire, a concerned neighbor in an apartment in Copenhagen calls the police to sort it all out. Now this isn't your regular patrol man lazily knocking on the door clutching a doughnut on one hand - they sent the SWAT team who called the guys out on the street with a megaphone.

As it turns out, it's just two guys enjoying their PlayStation 3 on a flat screen and speakers on full volume.

Now they didn't mention what exactly it was that they were playing, but we know for sure that these guys, a 21-year old and a friend, were even arrested with the suspicion of shooting - all because their home entertainment has phenomenal sound quality. Their apartment was searched, but no firearms were found, so they were released later. How's that for sound quality?

On December 16th 2008, a law was adopted in Denmark requiring the 1100 largest companies in the country to report on their corporate responsibility efforts. The new bill, passed by a vast majority of the Danish parliament, makes it mandatory for publicly listed companies, state-owned companies and institutional investors to include information on CSR in their annual financial reports.

The reports must include information on:

CSR/SRI is still voluntary and it is up to the companies themselves to decide how to engage, but if a company has no CSR policy this information must be stated explicitly.

The new reporting requirement will take effect from 2010.

Denmark will open their job markets to Romanians and Bulgarians

Romanians and Bulgarians are still not seen as full-fledged citizens of the European Union. Many member states continue to keep them out of their job markets, particularly now that their economies are falling into recession.A large number of European Union countries, including the Netherlands, will continue to restrict labor market access for citizens of recent EU newcomers Romania and Bulgaria, says a European Commission review published on Thursday. The older EU member states are worried about the loss of job opportunities and they are using the current financial crisis as an argument for protecting their job markets longer. "First we have to protect jobs for our own workers," Phil Woolas, British minister of state for borders and immigration, said in a statement.

The concern voiced by Woolas has been present since 10 countries, including Poland, joined the bloc in 2004. Under the terms of the Eastern European countries' accession to the EU, Western Europe countries were allowed to limit access to there labor markets for up to seven years. The same conditions were applied to Romania and Bulgaria when they joined in 2007. Restrictions were lifted for Polish workers in most member states in 2007 (though they remain in effect in Germany). Spain, Portugal, Greece, Hungary and Denmark will open their job markets to Romanians and Bulgarians in 2009.

Jobs in Denmark not listed in job adverts

This came as a surprise but showed quickly how important it is to have, and belong, to a school with a large network to draw upon. Copenhagen Business School (CBS) has just such a network through its CBS MBA Alumni Society, its vast Alumni database as well as its Corporate Partners network and jobs fair.

CBS recently expanded its network even further when it joined and participated in the recent Expat in Denmark. Since this summer, more than 700 people and companies have joined. In addition to CBS, Danske Bank, Microsoft and Novo Nordisk are just some of the large companies, which are backing the new network. “We are in a positive development period in which it has become easier to get foreigners into Denmark. Now it is a question of retaining them and here “Expat in Denmark” is a good initiative,” says HR chief Stig Flindt at Novo Nordisk.

This network also helps the families and spouses find their feet in Denmark.

In Denmark, Jewish children must stay away from schools with many Arab students Link

A slice of Danish


COPENHAGEN’S winding streets and curved waterways are not obvious places to find the answers to one of finance’s most pressing questions. Yet some argue that it was here, amid the devastation of the city’s great fire of 1795, that a mortgage-lending model was developed that may offer a way to thaw today’s mortgage markets in America and Europe.

Denmark has not escaped the credit crunch entirely. Its economy is contracting, house prices are falling and several of its smaller banks have been bailed out after making risky commercial loans. Nevertheless, the country’s mortgage banks are continuing to sell bonds and issue mortgages at a pace similar to that before the credit crisis. “We have been issuing bonds every day, even in the worst days,” says Henrik Hjortshoj-Nielsen of Nykredit, Denmark’s biggest mortgage lender. “We haven’t seen lower volumes.”

When a Danish mortgage bank grants a mortgage it is obliged to sell an equivalent bond with a maturity and cashflow that matches those of the underlying loan almost perfectly. This may not seem very different from the “originate-to-distribute” securitisation models that flourished in America and parts of Europe in recent years. [...]

More at The Economist

Email ThisBlogThis!Share to TwitterShare to FacebookShare to Pinterest
Etichete: mortgage

Mr. Grevil is formally being accused of leaking three classified “threat assessments” to a Danish newspaper in January/February 2004, in order to substantiate claims made verbatim to the same newspaper.
However, the documents demonstrated that the Danish prime minister, Anders Fogh Rasmussen, misinformed the parliament and the public when he said that "Iraq has weapons of mass destruction.". Moreover, Grevil's leaking of information demonstrated that the Danish government knew that all evidence suggested that there were no weapons of mass destruction in Iraq before Denmark participated in the invasion in Iraq in 2003. Nevertheless, when the government proposed to the parliament that Denmark should participate in the invasion, it was asserted that there were weapons of mass destruction in Iraq.
Grevil was sentenced 4 months to jail for leaking this information.

MAJOR FRANK GREVIL: [ ...] to make it short, it all started back in August of 2002 when we were prompted to provide reports and we did so continuously afterwards. Reports on Iraq. And at that time we realized—I mean, I was a member of a small group dealing with wmd. We realized that we had virtually no sources of our own so that we had to rely entirely on U.S. and U.K. information, and that would be final reports, intelligence estimates issued and then handed to us, so that what we did then was virtually [inaudible]. It continued all the way until the Danish parliament passed the law on the 19th of March 2003 to join the so-called Coalition of the Willing, and the parliament in my opinion at that time didn’t receive the information it needed to make a sound decision. I waited to react until about one year later, that was in January or February of this year when I saw that there was an ongoing debate in the Danish parliament where the opposition was in vain trying all the time to get hold on at least some of the documents that the government had that were not at that time presented to the parliament, and I couldn’t as a democratic citizen live with the fact that the government was withholding crucial documents. So, finally, I decided to make contact to these journalists who wanted to see some hard facts, hard evidence, before they would run a story on it. I only had had a few days to decide whether I would hand out the documents or not, and finally, I did.