Denmark unexpectedly entered a recession as the economy contracted for a second quarter as consumers and the government cut spending amid rising prices and a widening budget deficit.
Gross domestic product shrank 0.5 percent in the first quarter after contracting a revised 0.2 percent at the end of 2010, Copenhagen-based Statistics Denmark said today. Economists surveyed by Bloomberg had expected growth of 0.5 percent in the first quarter, according to the average of four estimates.
“The figures are highly surprising,” Steen Bocian, an economist at Danske Bank A/S in Copenhagen, said in an e-mail. “The reason for the lower consumption is a combination of higher taxes and higher inflation, driven by raw material prices.”
Denmark exited a recession in the second quarter of 2009 after exports and increased government spending boosted the smallest of the three Scandinavian economies. Denmark’s Finance Ministry said yesterday the economy will expand by 1.7 percent this year and by 1.9 percent in 2012, lifting its growth estimate for both years by 0.2 percentage point citing a recovery in global trade.
The government said that it expects a budget deficit of 4.1 percent this year, up from 2.9 percent in 2010.
Both public and private consumption fell 0.8 percent in the first quarter compared with the previous three-month period, the agency said. Fixed investments declined 8.3 percent.
Denmark’s GDP grew 1.1 percent in the first quarter compared with a year earlier, the agency said. 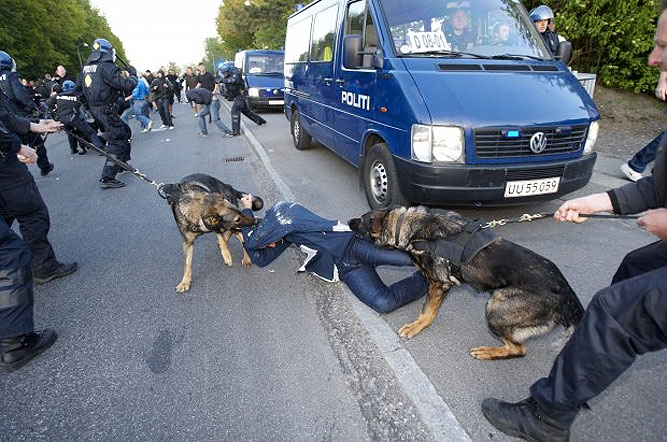 After a soccer game between Skive and FCK in Denmark a bunch of supporters were suddenly attacked by aggressive police dogs after doing nothing. One of the supporters says to the local news that he doesn’t understand why they attacked him and knocked him over, as well as some of his supporter friends. There were children and women nearby that got really shocked by the police dogs behavior. The Copenhagen police encouraged the dogs to attack and bite them, but they say that their dogs went crazy and that they couldn’t stop them. Not very convincing. The police said they were sorry for the incident, but injured supporters think it’s all a lie just to avoid guilt.

As far as Marmite goes, the Danish government hates the stuff. That at least is the conclusion that many foreigners have drawn following a ban on the sticky brown yeast extract.
The sales ban enforces a law restricting products fortified with added vitamins. Food giant Kellogg's withdrew some brands of breakfast cereal from Denmark when the legislation passed in 2004, but until now Marmite had escaped the attention of Danish authorities.

Marmite is not the only product to have fallen foul: Horlicks, Ovaltine and Farley's Rusks are similarly proscribed.
The ruling is not going down well with the country's substantial expatriate community – many of them work for large multinational firms such as Lego and Vestas, only to move away after a year or two.
The government has admitted it is having trouble retaining these highly skilled foreign workers, and has even debated measures in parliament to make them stay. This latest move is unlikely to help.
Recent comments from the Danish immigration minister, Søren Pind, that foreigners should "assimilate" or leave, coupled with the country's recent unilateral decision to reinstate border checks, have left some residents questioning the motivation behind the crackdown.

Lyndsay Jensen, a Yorkshire-born graphic designer in Copenhagen, despaired of the move.
"They don't like it because it's foreign," she said, adding that she already planned to send off for supplies from abroad. "But if they want to take my Marmite off me they'll have to wrench it from my cold dead hands."

More at Guardian and at The Telegraph (Marmite made illegal in Denmark)
Publicat de Alexandru la 20:09 No comments:

Any member of the Armed Forces who is fighting on the front line is entitled to a full English every morning. However, for generations the bacon has not been British because it has been too expensive; instead troops have been offered cheap Danish or Dutch bacon.
The experiment involves turning 4-year old sow pigs into rashers. Bacon has historically always been made from young male, or boar, pigs. Sows, whose sole purpose is to breed, have been considered tough and inedible in Britain and their meat is sold to German bratwurst makers and Italian salami makers. Long-standing butchers said the only time sow meat, which tends to be very fatty and dark in colour, has been sold as a cut of meat was during rationing in the Second World War.
Farmers and butchers have long complained that it was an insult to the men and women fighting that they have been fed Danish and Dutch bacon, it being poorer quality and derived from pigs reared to a lower welfare standard, but Mr Goodger, is confident that by next year British sows will take over.

"And I see no reason why in a few years' time supermarkets can't stock sow bacon as their basic, value range of bacon. They might have to call it something other than sow bacon; it's not exactly consumer friendly. But it would enormously help British pig farmers if they had a market for their sow meat."
British pig farmers have been in crisis for some time, with most losing money on every animal they raise. It is estimated that it costs a pig farmer £160 for every kilo of meat they produce, and the best price they can fetch at market is £135 per kilo of meat, with sows fetching 80p a kilo.

More at The Telegraph
Publicat de Alexandru la 18:36 No comments:


As I said before, Denmark gives a damn shit about EU rules. Denmark doesn't respect absolutely anything, even they steal children from foreigner parents.
This is one more brick in the wall.
Publicat de Alexandru la 21:38 No comments:

Lars Hedegaard, President of the Danish Free Press Society and The International Free Press Society, was found guilty of hate speech under the Danish penal code. His crime was to draw attention to child abuse and violence against women in Muslim culture. The day after the interview, he stressed that his opinions were about Islam and not intended to refer to all Muslims.
The trial was a show trial in which Hedegaard was unable to mount a defence, because under the Orwellian rules of the Danish legal system he was in effect convicted before his trial even took place.
Where are the western feminists and defenders of free speech now?