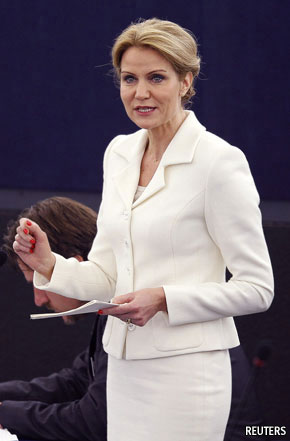 A leader falls abruptly from grace

WHEN Helle Thorning-Schmidt addressed the European Parliament on July 3rd to mark the end of Denmark’s six-month stint in the European Union’s presidency, her words fell on many empty seats. [...]
The Danish prime minister’s words to the press betrayed a little pique. “Why is everybody so keen to play down the results of the last six months?” she demanded. She had in mind deals on growth, jobs, energy efficiency and patents. Given the low expectations of her presidency, such umbrage is understandable.  [...]
Yet however unappreciated Ms Thorning-Schmidt feels in Europe, her real troubles are at home. A YouGov opinion poll for metroXpress newspaper gives her Social Democrats their lowest rating in over a century: 16.1%, a plunge from the 24.8% they took last September. [...]
Denmark is in better shape than the rest of the EU. Unemployment is officially 6.2%, against a euro-zone average of 11.1%; GDP edged out of a technical recession with a 0.4% jump in the first quarter. [...]
The budget deficit of 1.8% of GDP also compares favourably with much of Europe, but Denmark’s public spending (the highest in the EU as a share of GDP) must be cut because of demographic change. The government and opposition agree that the welfare state needs tweaking. Ms Thorning-Schmidt has set about reform with zeal. But she has alienated a good chunk of her supporters by agreeing on a tax package with the centre-right.
This will reduce the tax burden on average earners by raising the threshold for the top tax bracket; increase tax credits for those with jobs; and cut corporate taxes. These measures are to be paid for in part by reducing old-age pensions and unemployment benefits. [...]
The jilted left has now denounced the government. If Ms Thorning-Schmidt expects their votes to keep her in power, she will have to come up with some rewards, say the leftists. With a sense of betrayal also spreading among her own voters, the prime minister may struggle merely to complete the full four years of her term.

Photo and text from The Economist
Publicat de Alexandru la 21:31 No comments: