Confidential documents show that Connie Hedegaard, the European commissioner for climate action, had been informed about fraudsters targeting the Danish carbon registry to enable them to trade in credits last summer, as the UK and the Netherlands were clamping down on the fraud by scrapping VAT on carbon trading.
Denmark is now at the centre of a Europol investigation into carbon fraud worth €5bn (Ł4.3bn). An estimated 116 arrests have been made so far, around 30 of them in the UK.
Previously, Hedegaard had denied knowing about the suspected fraud until a Danish newspaper reported it in December. "I was never informed about this until last autumn when Ekstra Bladet looked into the fraud".
But the confidential climate ministry report entitled VAT Fraud in the European CO2 Quota Register Including the Danish, appears to have been signed with Hedegaard's initials, indicating she was made aware of the problem in August last year.
"The tax department this spring became aware of fraud in the EU with VAT in connection with trade of CO2 quotas and credits. In particular Denmark seems to be the target of VAT fraud," it said.
An appendix attached to the report also dated in August from the Danish tax authorities said that suspicious trades had been identified, most of them linked to the UK. "For now we have two cases with an estimated loss in total of 3.8m Danish kroner [Ł440,000]. The trades are primarily performed by UK operators with Danish VAT numbers."
"There is still no clear image of how the fraud is organised, but there has been the common feature that the companies involved in the first suspicious transactions were companies from other EU countries that merely held accounts in the Danish quota registry."

Read more at The Guardian

Shame on Denmark. This country is stealing in huge style, anything is available (even children).
Publicat de Alexandru la 20:39 No comments:

The Danish government plans to clear forests and destroy unique nature for the benefit of industry.
The Danish environment minister Troels Lund Poulsen decided, on behalf of the government, on 30th September 2009, that the clearing of 15 km2 of forest in the north west of Denmark will take place. A test centre for the development of offshore windmills is planned to take up 30 km2 of land in the Thy region, near Řsterild. This deforestation will create an increase of 400,000 tonnes of CO2 emission, the equivalent of the CO2 emission of 100,000 people per year.
The government will force the local population out of their homes. The reasoning behind this is said to be for the benefit of the Danish windmill industry, which will in turn create more Danish jobs. The regulations to finalise the evictions goes against Denmark’s constitution and is therefore clearly illegal.
In current plans, the area is categorised as a recreational area, where the set up of windmills is prohibited.
The region is one of Denmark’s most beautiful areas. With its rugged landscapes and grand views, as well as many rare species of animals, birds and plants, the area is representative of authentic Danish nature. There are very few areas of Denmark left, where one can experience darkness at night and complete silence.
The windmills, which are 250 meters tall, are planned to be along a 6 km linear south/north stretch. This will prevent birds in the international Ramsar-area, Vejlerne, which is situated to the east of the test centre, from flying west to the EU-habitat area Vullum Sř and to Thy National Park just south of Hanstholm.
The Danish government has not consulted properly about the plans. The Danish citizens had little time to put forward comments of the project. The hearing has only been 11 days long, with 9 of those being a national holiday.

Read more for details at Watts Up With That?
Publicat de Alexandru la 23:30 2 comments:

A majority vote in parliament yesterday will see the introduction of a bill giving equal adoption rights for civil partners and straight married couples in Denmark.
The Copenhagen Post reports that the proposal, from Civil Centre Party founder Simon Emil Ammitzbøll, grants partners registered in civil unions the right to adopt unrelated children both domestically and internationally.
Currently, gays and lesbians can adopt individually in the country and couples can adopt their partner's existing children. The bill will grant same-sex couples the right to adopt jointly, in line with straight married couples.
Other Nordic countries such as Iceland, Norway and Sweden already allow same-sex couples to adopt jointly.
According to figures from 2007, 103 out of 712 step-child adoptions were from couples in civil partnerships.
Most adoptions involving unrelated children tend to take place abroad, making it difficult for Danish same-sex couples to do so, as many countries will not allow homosexual adoption.

Even that, everybody knows that homosexual adoption is an abuse over the children, it is outrageous and unacceptable (link1 (PDF), link2, link3, link4, link5).
Publicat de Alexandru la 00:33 No comments: This is an interesting structure for a church in Denmark – Brændkjærkirken in Kolding.
I don't understand why there is the cross on top as long as Denmark doesn't trust at all in Jesus Christ.
Photo
Publicat de Alexandru la 22:28 No comments:

Email ThisBlogThis!Share to TwitterShare to FacebookShare to Pinterest
Etichete: church

Denmark's KFC website has been targeted by Islamist hackers.
The hackers decided to gain access to the fast food site and post an educational video about their religion on the page.
They also left instructions to the Danish government to introduce a new law to punish people who publicly insult religion.
The hackers implied in their demands that if the law is not introduced, the hacking of Danish websites will continue.
The hackers left a slightly cryptic message on the site, which read: 'If your Gov. don't make rules for Punishing anyone Insult Religions in the name of (Freedom of Speech ! ) or ( Freedom to Insult ) :)
Read more: Daily Mail

This is not so big besides what have done Romanian National Security. They hacked Daily Telegraph (GB), Le Monde (FR), RAI television, La Stampa (IT), telling them they should respect Romania and gypsies are not romanians, morons!, they didn't make the romanian history.
Undoubtly their next target would be Denmark. 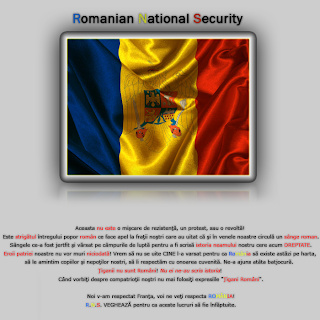