Ostensibly at least, Denmark as a society is about as `Secular Humanist` as it gets, and ideas, concepts, programmes and ideologies of what can only be described as being of a radical nature, and which would be sure to raise eyebrows and cause heated debate elsewhere, are barely considered worth mentioning here. Such is the level of indoctrination into the desired consensus viewpoint. [...]

The Secular Humanism being practised in Denmark and most other western countries is in all respects akin to a religion, excepting that it refuses to publicly at least, acknowledge any higher moral authority, and is especially virulent in it's enmity towards Christianity and Islam. The purveyors of this new `gospel` will have us believe, (although those at the top know different) has, as it's governing axioms:
1] There is no God.
2] There are no absolute values.
3] The Supernatural is superstition.
4] All life begins and ends here. [...]

This latest assault on children and on what's left of the moral fabric of the Danish Kingdom is supported by the most evil of intentions. There is much more to this than the promotion of an alternative lifestyle. It’s not even about co-opting infants who would naturally and almost without exception become heterosexual adults into a deviant life choice. [...]

I have presented an hypothesis that Denmark is an experimental `Test Zone` for the New World Order, and that Danes have been subjected to a level of mass programming on a scale not seen anywhere else. And I stand by that, and that in itself would explain the almost uniform acceptance of the homosexual alternative in Denmark, as like with every other pernicious, damaging and politically correct, anti-Christian, anti-morality, anti-patriarchal family, and anti decency construct the state has come up with, it has been `hammered` into society's conciousness here for decades. But that factor still doesn't stop me from being utterly astonished by the support for what is, after all, just not natural. [...]

The very fact that the matter of the Danish church allowing homosexual marriages is so solidly supported by the Danish public and that many ordained ministers are apparently and overwhelmingly in favour of it only goes to show that there is nothing Christian about the Danish `Folkekirke.` Like most other established churches these days, it has been infiltrated at the seminary level by feminists, homosexuals, humanists, Marxists and Luciferians, all determined to break it down from the inside out, and it has now travelled so far from the narrow path of God and Jesus.

How the Welfare State Corrupted Sweden

Whereas my parents mysteriously seem to have inherited much of the "older" form of morality, most people of their age, and especially those younger, are paradigmatically different from their parents’ generation. They are children of the welfare state and are fully aware of the social security benefits to which they have a “right.” They don’t reflect on where these benefits come from, but are skeptical towards politicians whom they believe might take them away. “Change” quickly became a bad word, since it necessarily implies a change to the system on which people are parasitically dependent.

This is a fragment from How the Welfare State Corrupted Sweden (2006) by Per Bylund. It is a very interesting reading.
In Denmark is the same conception of welfare state. People becomes dependents from the state in all forms.
Publicat de Alexandru la 09:22 No comments:

Taking away a young person’s passport will prevent the practice of them being sent back to their parents’ native countries for schooling in religious and cultural matters.
A majority in parliament – represented by all government opposition parties and the usual government ally Danish People’s Party – reportedly supports the idea of revoking passports for those would-be travellers suspected of being returned for re-education in an effort to curb the phenomenon.
The proposal to take away passports in these instances was put forth by the Social Liberals, who believe the move is not punishment but protection for the young people.
Read more

The idea of a supposedly free government forbidding its citizens from leaving the country seems downright Orwellian. It is absolutely unacceptable. This is brain washing for young children, of a totalitarian state.
Publicat de Alexandru la 21:56 No comments:

Some political refugees are still living in bad situations in Denmark, regardless to the Refugees International Conventions and Protocols Denmark had signed. These bad situations escalated since the second victory of the liberal party of Denmark "Venstre parti" to pursue a second term of governing, following "Bush American's example". [...]

That member of Parliament said, "All refugees should work in the cleaning sector regardless to their careers," Said one of the refugees and added, "I would like to work on this sector if there's really a job there not a long practices period, but I've doubt that other professionals and intellectuals would".

This attitude reflects no respect to professionalism and intellectuality. It is against the integration law too, because it imposes the following question: How they decided to integrate those political refugees with this negative intention. Forget about who should integrate into whom! [...]

Those people I met here are two aware that they do not have and they do not mean any discrimination in their jobs prescriptions. They are desperately feeling they are ZEROS not humans. [...]

Students in Denmark demonstrated against such bad educational situations and sent critical messages to the Education Minister for his continuous changes in the educational system. Some of them told him that they couldn't say bad words, but they wanted to know why he is irritating them by those frequent changes.

Denmark, the most expensive in EU

Price levels for consumer goods and services in 2008 differed widely across Europe: in Denmark consumer prices are 41% higher than the average of the 27 EU Member States, while the cheapest country is Bulgaria (49% below the average).
The main results of price surveys covering around 2500 consumer goods and services across 37 European countries can be seen on PDF.
Publicat de Alexandru la 21:30 No comments:

Denmark is Tough for Political Refugees

Why Denmark is Tough for Political Refugees? The governing party and its allies wanted it to be like that. Accept it or get out! [...]

Some political refugees live in humiliation under hard conditions enforced by those new regulations, which goes the opposite direction to the 1951 Convention and the 1967 Protocol relating to the status of refugees. [...]

No one wants to speak about why there are no good programs for well and high-educated political refugees to continue their careers.

"Er der en opposition i Danmark?" [...] "Det synes jeg ikke på grund af at der også er ikke rigtig demokrati i Danmark! Det slag af demokrati findes her er en kliché af demokrati."
And translation for non-danish speakers: "Is there opposition in Denmark?" "I don't think so, because in Denmark is not a real democracy! The kind of democracry in this country, is a cliche of democracy."
Therefore, Denmark is a communist country, a dictatorship.

Racist advertising in Denmark: 1, 2 and 3

Violence and Racism in Copenhagen 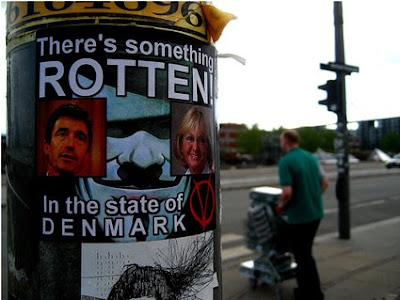