2. Christmas traditions and celebrations in Denmark

America has been accused of illegally spying on hundreds of people in Norway, Denmark, Finland, Sweden and Iceland.
Officials in the five countries expressed their unhappiness at surveillance tactics that were conducted without the knowledge of the individual nations' governments.
In other instances, it has stated it has 'nothing to hide'. But Danish security services have stated they will begin an investigation into the matter if evidence of illegal surveillance is uncovered.
When the Norwegian case became public knowledge, Denmark also raised its concerns about the surveillance of its citizens.
Danish newspaper Politiken claimed that all American embassies have surveillance teams to address threats to the U.S. security.
Former head of the Danish security service PET Jorgen Bonniksen said that he had never heard of such groups: 'If this is true, then we have to deal with illegal intelligence operations in Denmark.
'On Danish territory such operations can be conducted by PET, and PET only.'
The current head of PET, Jakob Scharf, said that if illegal activity is determined, 'of course, we will take action.'

Email ThisBlogThis!Share to TwitterShare to FacebookShare to Pinterest
Etichete: PET

This article is about the disastrous effects of divorce and social engineering, but it´s not written by a man who was ripped off by his bitchy ex-wife. It´s written by a woman who, according to her own account, made efforts to minimize divorce trauma and adjust to an insane new Western lifestyle ... to little avail, of course. Although it shows divorced/remarried women in a favorable light and actually suggests they draw tighter limits, the whole situation is grotesque to anyone not brainwashed by feminism and NWO propaganda.

Denmark is vision of multiculturalism's failings 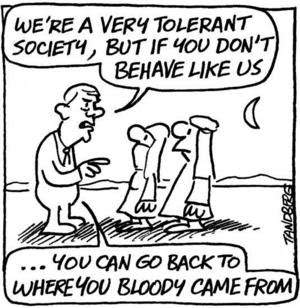 No country adopted multiculturalism and ethnic tolerance with the enthusiasm and idealism of Denmark.
Some countries had little choice but to accept an influx of people with different and conflicting values and mores. When its African colonies gained independence, and when Algeria broke away after a bitter war, France became home to millions of displaced Arabs.

During the 1970s, no country was as welcoming as Denmark to newcomers. Danes had no obligation to encourage outsiders -but it did. Perhaps Denmark was influenced by its gallant record of standing up to the Nazi occupation in the Second World War -- not with guns and bombs, but by its response to the order that all Jews be rounded up and sent to a concentration camp.
In defiance, an enterprising and heroic underground network spirited 7,200 Jews out of Denmark, mostly on fishing vessels, to safety in Sweden, a national action that spoke volumes.
Subsequently, Denmark's socialist government has tried to look after every citizen. Regarding immigrants, it sought to avoid mistakes of other countries, and ensure that newcomers could integrate and blend with Danes and feel comfortable.
Denmark's crime rate was one of the lowest in Europe; its education system was excellent and available to all; its humanitarianism beyond repute. Denmark's history of pillaging Vikings succumbed to generous welfare to immigrants, plus housing and other amenities that it hoped would set an example for the world in multicultural inclusiveness.
To a great degree it worked. But not with Muslims, who chose not to integrate, but to live in self-chosen ghettos where Danish liberalism and tolerance were seen as decadent and offensive.

Muslims want Sharia law in Denmark. Forced marriages exist (promising newborn daughters to male cousins in the home country); Muslims who convert to Christianity are threatened with death; women are forced to cover their faces, fearing male vengeance.
Anti-Israel marches turn into anti-Jewish protests.
Like other European countries opposition is growing against multiculturalism -- now seen as a failure.

In Denmark, observers Jacob Mchangama and Christopher Arzrouni warn against the excessive use and misuse of human rights. Originally envisioned as a core of rights ensuring political and individual liberty, today human rights are increasingly used for the opposite purpose: To claim other people’s resources, property etc.

The Danish writer Carsten Ringsmose was a speaker at a conference at the University of Odense on the immigration-related topic of “Recognition and integration.” He outlined the projected population growth for the Islamic world, and stated that if recent prognoses are correct, the Islamic world will witness a population growth more than the equivalent of all EU member countries combined within just a few decades. One of the other speakers suggested that this population boom could be solved through migration to the West, which would mean that Denmark, with a present population of 5.4 million inhabitants, would have to accept perhaps 9.5 million predominantly Muslim immigrants within the coming two generations. The man who suggested this, accompanied by segments of the audience, laughed when Mr. Ringsmose suggested that this simply wasn’t doable.